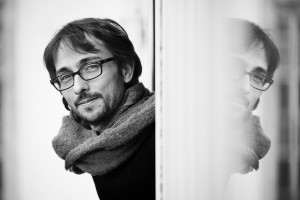 His work comprises both music for Television and Film, playing internationally in pertinant Filmfestivals.

Born in Rome, he began his piano lessons at the age of 11, studying at the Conservatorio S. Cecilia and graduating in 2007. In 2003 he began his composition studies with Giampaolo Chiti (Scuola sperimentale di composizione). Starting in 2008 he embarked upon Film Composition Studies at the HFF Konrad Wolf (Filmuniversität Babelsberg), graduating in 2012. In 2016 he was invited to Berlinale Talents.

For the shortfilm „Zwei Männer und ein Tisch“ from Israeli Director Esti Amrami, he composed a music that combined elements of both the klezmer and arabic soundworlds. The film was shown in the next generation section at the Cannes International Film Festival 2012. It won the prise for best comedy of the year at the Berlin Shortcutz Festival.

Working with Esti Amrami for the third time, the black comedy „Anderswo“, won international acclaim and played in many important filmfestivals worldwide, winning many prises. The world premier was at the 64th Internationalen Filmfestspiele Berlin in which it won the DFJW award “Dialogue en perspective”.

Parallel to work as a Film Composer, he plays Keyboards with the Indie-Pop band Erik and Me. For the band PRAG he has worked as Orchestrater and Conducter for the first two records (Premiere, Kein Abschied), as well as playing Accordian for a Unpluged session or Video.

Through their love of Classical, Pop and Film music, he has developed with theater composer Ingo Günther music for three Herbert Fritsch productions at the Volksbühne in Berlin. For Frau Luna, he plays anolog synthesizers, for Ohne Titel Nr. 1 prepaired piano, and for der die mann he plays Keyboards and Electronics. Ohne Titel Nr. 1 has been played in such diverse theatre festivals such as: Festival Santiago a Mil in Chile, the Wiener Festwochen 2015 and the Berliner Theatertreffen 2014. der die mann was invited to the Berliner Theatertreffen 2016.